On June 18, 32,450 people came together to help break the World Record for the Largest Swimming Lesson! They broke last years record of 24,874 people.

The event generated more than 58.5 million media impressions, which included print, radio and television coverage. The World's Largest Swimming Lesson was created by the World Waterpark Association in 2010.

Warm water therapies have been proven as an effective way to improve health through the centuries. In ancient Rome, natural spring waters were popular and known for having special curative powers. Heat and massaging jets are best for relieving everyday stress that creates muscle tension and restricts blood flow, causing sleeplessness, fatigue and headaches. These physical ailments can affect your thoughts, our moods and our ability to enjoy life to the fullest. 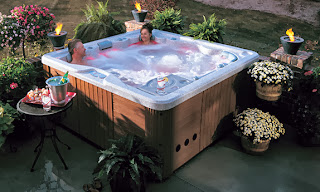 Hydrotherapy is the use of water as a medical treatment, to help a person relax and relieve minor aches and pains. In a hot tub, these three key elements combine to create a hydrotherapeutic effect.
How Stress Affects Us
Our Master Spas give you the perfect combination of heated water, weightless buoyancy, and soothing jets that massage your stress away.  For more information on Master Spas Hot Tubs please visit http://www.suntekpoolsandspas.com/hot_tubs.html or give us a call 631.249.7727.
Posted by Unknown at 10:09 AM

Join the Revolution with the Michael Phelps Swim Spa

Suntek Pools and Spas is proud to be the only licensed dealer of the Michael Phelps Signature Swim Spa. This amazing line from Master Spas allows you to jog in place, swim against a current, row in place, or even relax like a regular hot tub. The Wave Propulsion Technology propulsion makes these units completely unique from the low quality Endless Pools out there. This is the only one fit for the greatest Olympian of All-Time!

The multipurpose Swim Spas can be used for a variety of different activities.  Check out the list below of different activities. Click on each one for more information.
Come by our Famingdale showroom and check out one of these amazing Michael Phelps Signature Swim Spas! We're located right on 110, Broad Hollow Road. For more information please visit our website http://www.suntekpoolsandspas.com/michael_phelps_signature_swim_spa.html.
Posted by Unknown at 11:40 AM

Why You Should Service Your Hot Tub for the Winter Months

It's hard to believe that summer is actually over, but now it's time to start planning ahead for winterizing your hot tub. To start off, you should consider leaving your hot tub on and running throughout the winter months. Relaxing in your hot tub while the snow is all around you is truly a different feeling that many of our customers enjoy. Of course, this will depend on the winter we will have and your tolerance to going outside in the cold to use your hot tub.

We recommend flushing out your hot tub every 6 months, depending on the condition of the water. Remember, if this process is done incorrectly, you can end up damaging the hot tub. If you decide to winterize your hot tub for the entirety of winter, freezing water can burst pipes and other fixtures in your spa that can be very expensive to replace.

Our Hot Tub service technicians at Suntek Pools and Spas are experts at winterizing hot tubs as well as flushing their systems. Our Spa Drain, Clean and Fill service includes:
If you have any questions on our Hot Tub Drain/Clean/Fill or winterizing services, please call us at 631.249.7727.  Stay up to date with the latest spa and pool news by LIKING our Facebook page, Linked Here!
Posted by Unknown at 1:07 PM

How Do I Get Rid of Hot Tub Foam

As a hot tub gets more use and people are in and out regularly, dissolved solids that don't belong in the water begin to build up causing the hot tub to foam. Some of these dissolved solid include: body oils, shampoo, soaps, lotion, and detergents.  When the level of these solids reach a certain point, they rise to the water surface, producing the foam we all hate.

At Suntek Pools and Spas, we'll give you detailed direction on HOW to get rid of Hot Tub Foam.  For a quick fix, we offer Leisure Time Foam Down, a non-oily concentrated foam suppressant.  This product differs from other foam suppressants because it was specially designed for use in hot water.  It has an easy flip-top lid for accurate and direct application.  It is important to note that consistent and excessive foaming indicates water problems.  If your hot tub water is still filled with foam, stop by our Farmingdale location with samples of your water.  Our water testing technicians will help you determine the correct plan of action.

One of our bestsellers features a deep reverse molded Stress Relief Seat and a contoured lounge, giving you a wide variety of seating options and more.  The heat and massaging elements of Healthy Living Hot Tubs are designed to ease the aches, pains, and stresses of life whole simultaneously boosting the mind's and body's natural healing response systems. Healthy Living Hot Tubs spas offer a wealth of wellness benefits for your healthy life. 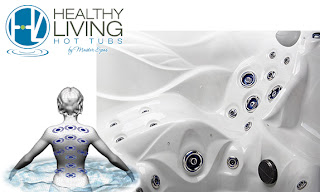 Football is Finally Back!

The season opener has plenty of drama to entice the fans. The game between the Ravens and Broncos will be a rematch of the amazing 2012 AFC Championship game, where on the last play of regulation Joe Flacco and the Ravens scored on a hail mary to win the game.  Adding to the on the field drama, the reigning champs, Ravens, will start the season on the road due to scheduling conflicts with the Baltimore Orioles

For all your NFL Predictions for 2013 visit Peter King's SI.com article, http://goo.gl/kbLKO4 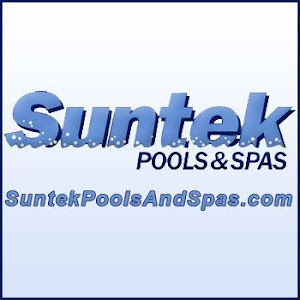 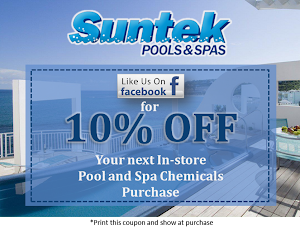